When I say the words “the best coffee maker” what comes to mind first? Keurig, doesn’t it? It’s only natural to think of Keurig models. But that doesn’t mean there aren’t any other remarkable coffee makers. Another brand you should keep an eye on is Hamilton Beach. With that in mind, here are the Hamilton Beach 49980A vs. 49980Z reviews.

The company manufactures kitchen appliances that rank among the top contenders. From toasters and grills to coffee makers. Their brewing stations are no less than Keurig, to be honest. Two of the most popular models are the 49980A and 49980Z.

And in this post, I’m going to pit one against the other. Because I’m certain there does exist a better choice. So let’s get started then! 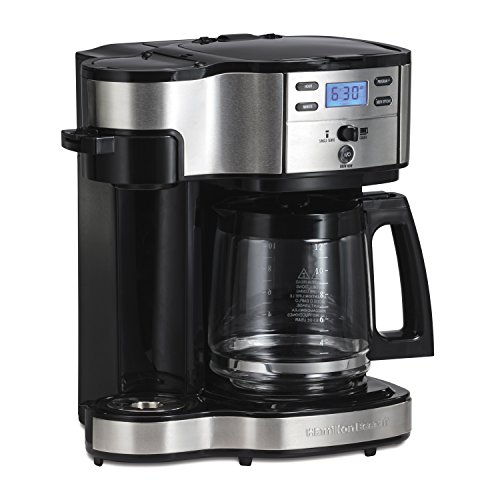 The front part of this device is constructed using stainless steel metal. It’s what gives the appliance that classic appeal. You don’t even have to worry about getting any fingerprints on it. That’s how beautiful and high-quality the finish is. So touch it as much as and wherever you like.

As for the back part, it’s made of plastic. That’s black in color. This is where you’ll find the machine’s water reservoir. Refilling the tank is no hassle either. All you have to do is open the device’s top lid. To fill up the 12-cup capacity carafe! And then pour it, that’s about it.

You can brew the coffee two ways; full pot and single serve. As for the brew strength, there are 950 watts packed in here. For regular or bold coffee! The machine is completely programmable with the automatic shut on and off feature.

There’s no denying that the Hamilton Beach 49980A is an excellent option. You simply cannot go wrong with this one if you’re genuinely interested in buying it. 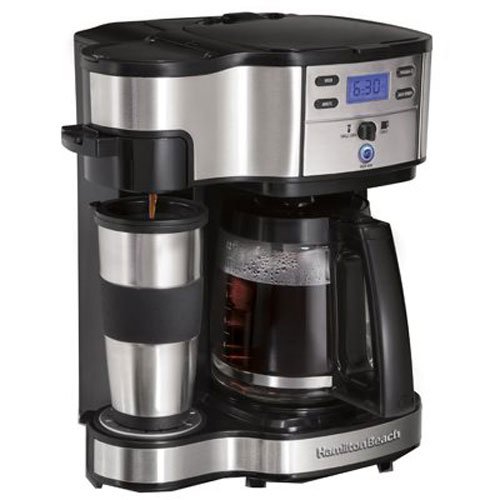 This versatile 12-cup Hamilton Beach 49980Z 2-Way Brewer features the most recent technology. It prepares a single cup simply by grinding coffee into the filter directly. In fact, you even get the opportunity to insert your coffee pod.

The carafe side is to bring into existence several cups of coffee. The construction, in this case too, consists of stainless steel (front) and plastic (back). There’s a unique scoop installed in here. That measures as well as filters your ground coffee. So you end up with a perfect cup each time.

Automatic shut off and on, fully programmable, and regular/bold coffee brew strength. Much like the Hamilton Beach 49980A model!

What makes the 49980Z stand out is the inclusion of the large capacity of the reservoir. There’s a user-friendly control panel. With a display that shows minute and hour buttons! This is very useful if you wish to program brewing 24 hours in advance. Most Hamilton Beach 49980Z reviews don’t forget to talk about these exceptional advantages.

To sum it up, the Hamilton Beach 49980Z Coffee Maker brews both premium and basic roast coffee. In less time and cost than your local coffeehouse!

There’s no denying that both models carry enough weight against the competition. After all, the manufacturer is Hamilton Beach. It’s a renowned American company that offers a broad variety of products. The Hamilton Beach coffee maker has quite a popular ranking on the current market.

The 49980A and 49980Z models offer tons of flexibility. Along with a 1-year warranty and many clever features. On top of that, both compare reasonably well with other machines of other brands. In terms of price and performance!

However, the topic of Hamilton Beach 49980A vs. 49980Z reviews comparison still stands. It’s a different story entirely. So keep reading to find out more.

What Coffee to Use? 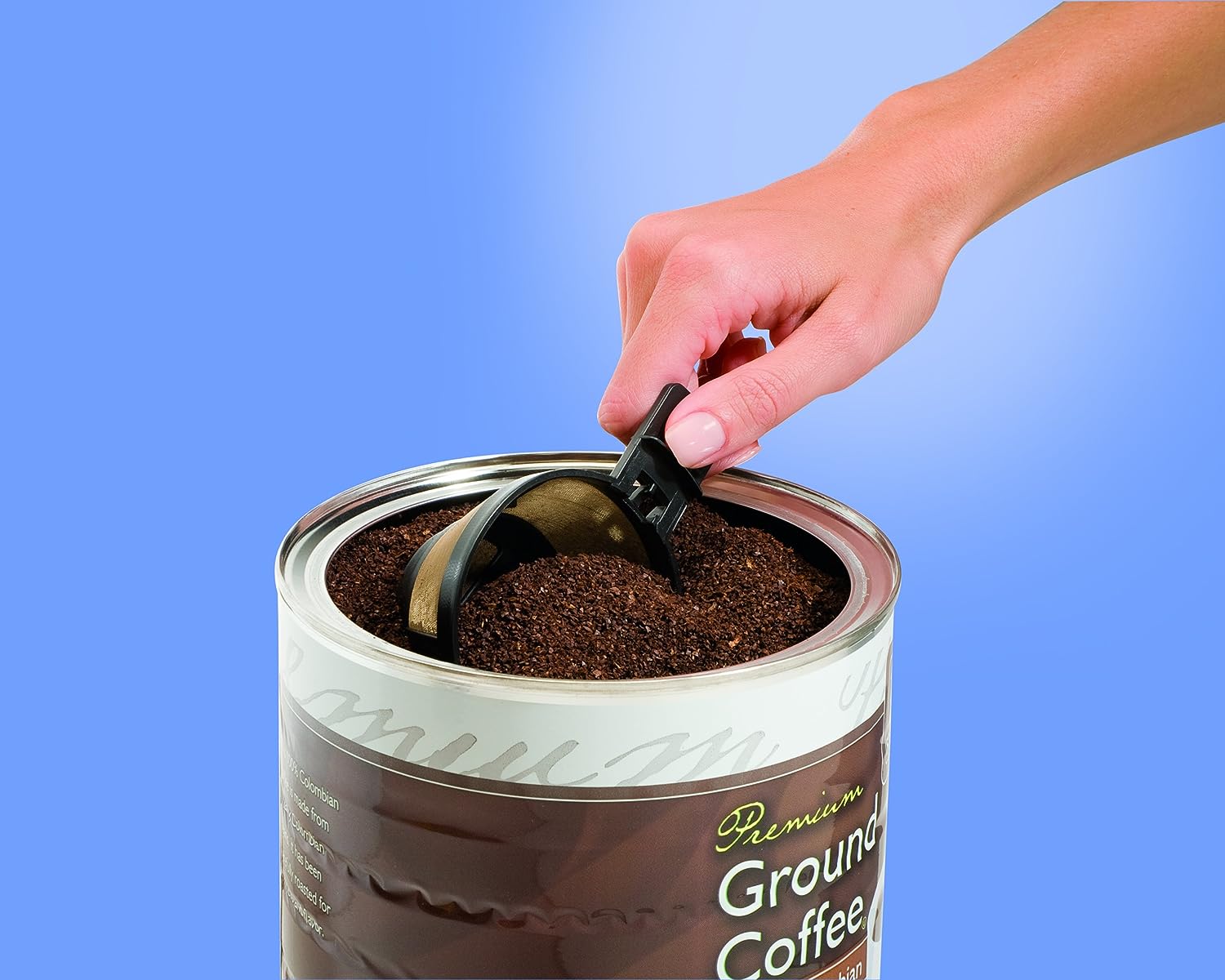 To be completely honest with you, neither unit has the capacity to brew pod coffee. Unlike Keurig as well as Nespresso! Rather the Hamilton Beach coffee maker makes use of ground coffee. You can even opt for the soft pods that look like discs. This is actually a good thing because it means less plastic waste capsules at the landfill.

On top of that, when you choose ground coffee, the process becomes easier. You just add a few scoops into that filter basket before popping it inside. Or you can purchase coffee that’s pre-ground. For times when you’re in a rush to leave! However, nothing beats the superior flavor and freshness of ground beans. Remember that.

So anyway, both the models prepare coffee in a similar manner. That’s the point here. 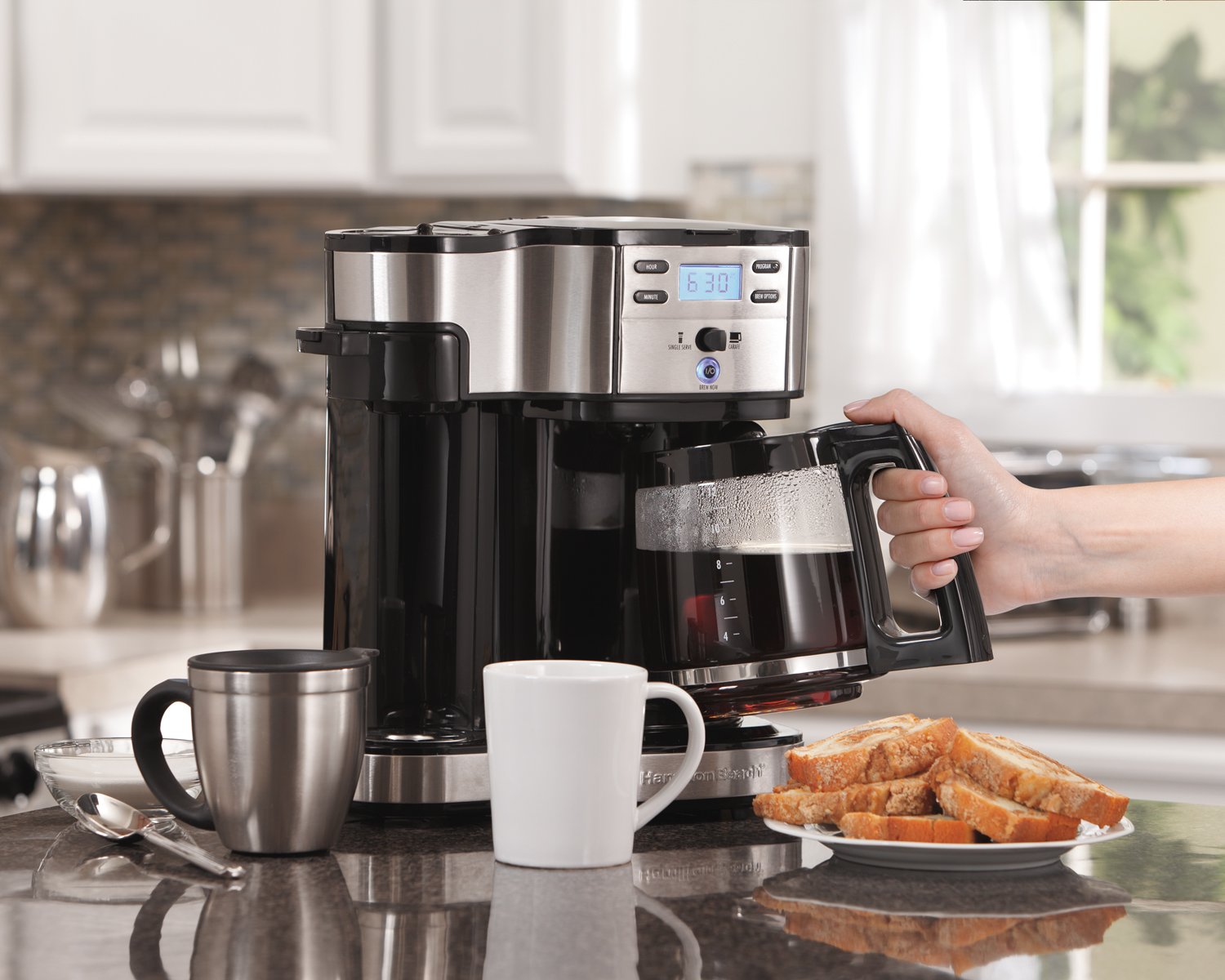 The Hamilton Beach 49980A and 49980Z coffee makers are two-sided. This implies that both machines brew a carafe and single cup. So you don’t have to deal with the mess caused by removable drip trays. The carafe stays on the appliance ready to use whenever need be. Now, this is a common advantage with such Hamilton Beach coffee makers.

In fact, both units are also packed with virtually identical carafes. Built using tough glass that can hold as many as 12 cups.

Moreover, the well-designed spout, in both cases, prevents drips at the time of pouring. Even the time taken to fill the carafe is the same. Around seven minutes!

So once again, there’s not much to differentiate between the two. At least as far as carafe brewing is concerned!

You add the correct amount of water for filling the selected cup size. When using either Hamilton Beach coffee maker. The single-serve method is also the same.

The travel mug capacity is 14 ounces. And at the time of filling this, there’s no having to deal with splashes. You can raise the device’s cup rest to various levels. What this means is that the rest sits just under that spout for capturing each drop. No matter how large or small your cup! 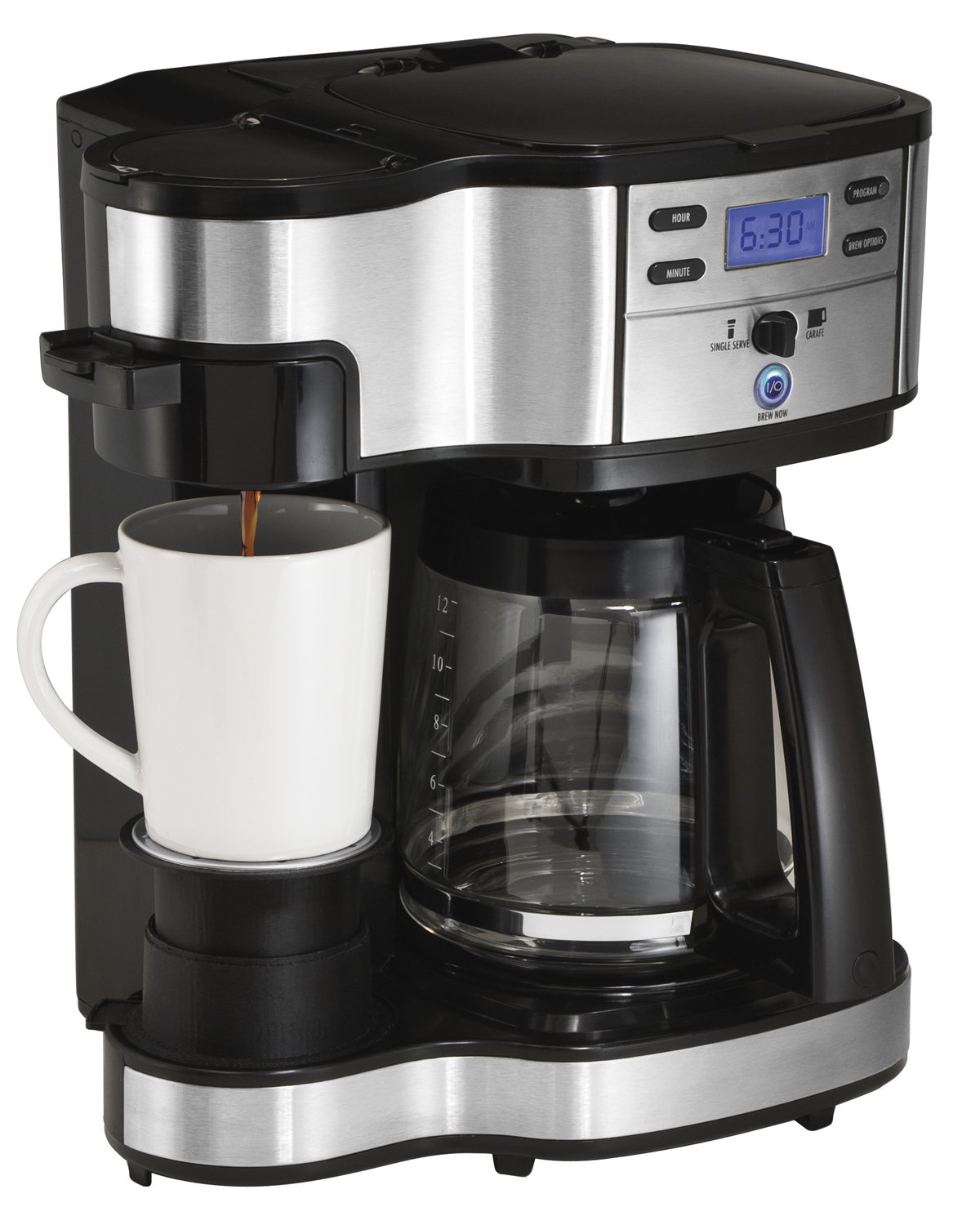 Now you already know that the 49980A and 49980Z provide a capacity of 12 cups. This means larger carafes, right? And that suggests a longer waiting time. Doesn’t it? Actually, no it doesn’t.

Hamilton Beach coffee makers are packed with a brilliant feature. It allows you to remove that carafe for pouring a cup ahead of finishing brewing. This clever feature intrudes the brewing process. So it’s not like you’ve got to bother yourself with counter drips.

With that in mind, both models get your single cup ready quickly. But you get to make use of only the one brewer side at a given point.

What’s the deal about single-serve machines? Unfortunately, these types of coffee makers are a bit lacking in terms of brewing strength. And that holds true for both the Hamilton Beach models here.

However, let me not underestimate the flavor boost they have to offer. You get to pick between “bold” and “regular.” Based on your caffeine tastes and preferences!

When you add your favorite ground coffee, you might think you’re adjusting the strength. To be honest, this is true only to a certain extent. Too much coffee ground content causes the water in the basket to overflow. And this leads to a big mess. What’s worse than that? Ending up with a cup of weak tasting coffee!

So the best way to go about it is to choose the “bold” setting for stronger coffee. In both the coffee makers! 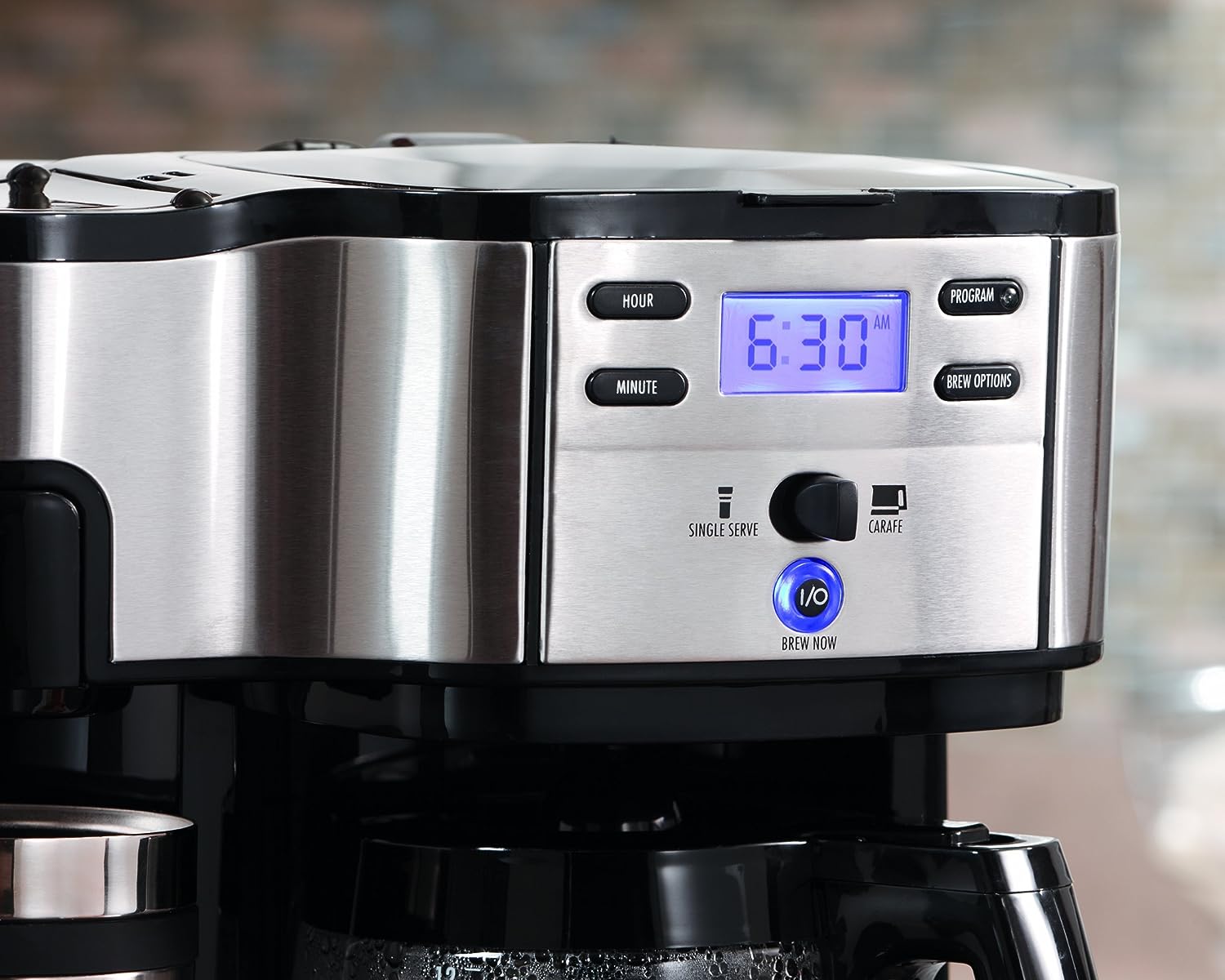 Hot coffee the first thing in the morning is like a dream come true. In that aspect, you have lots to love about the Hamilton Beach 49980A and 49980Z. Both appliances are equipped with a useful timer. That automatically switches on that brewer.

You can set the whole thing up even 24 hours beforehand. Also, let’s say that you decide to laze around in bed for an additional 10 minutes. Even then, the integrated hot plate of both the coffee makers keeps your beverage warm enough for you.

It’s only natural to assume that both models have an automatic off feature. They shut off automatically after 2 hours. So you don’t need to worry about burning down the house. At times when you think you left the machine on!

Are there any notable design element differences between the 49980A and 49980Z? None whatsoever!

Place both the brewers next to each other. And you’ll be shocked to not be able to tell them apart. The size is the same. The controls are the same. The stainless steel finish is the same. In fact, both the appliances even have the same backlit LCD display. To show the digital formatted time!

So What Exactly Is the Difference between the Hamilton Beach 49980A and 49980Z?

As is quite obvious, there are no major differences.

Presumably speaking, the upgrade exists in the former’s internal mechanism. And there’s no way for me, you or anyone to figure it out. Except for Hamilton Beach of course!

But truthfully speaking, I see no differences in terms of both functionality and appearance.

I tried my level best to find some sort of a difference. Between the two very popular Hamilton Beach machines! But the matter of fact is that both are identical.

So in the end, it all boils down to how much you’re willing to spend. The 49980A has an incredibly fitting budget-friendly price tag. And for the 49980Z, it’s way costlier. And why that is only Hamilton Beach knows.

But if you think there are any significant differences, please type them down in the comments section below. I would love to know!

1. Berkey vs. Propur vs. Brita vs. Aquasana (What Is The Best Water Filter?)

5. How to Clean an Air Mattress Even On Your Own?