The brewing methods for coffee seem to keep increasing all the time. I mean there are just so many available at this very moment. So does it actually matter if your morning kick comes from a Drip Coffee Maker or French press? And what in the world is a Percolator now?

Here’s what you need. A detailed comparison between Chemex vs. French Press vs. Drip Coffee Maker vs. Percolator. These are the four most common brewing methods for coffee in the world today.

If you’re a coffee lover, you would definitely agree to what I’m about to say. That the brewing technique you choose does indeed affect the end result that is your coffee. The taste, freshness, texture, and aroma don’t remain the same.

In fact, the method you pick also determines nutritional factors. Such as the level of java antioxidants. Along with carcinogenic chemicals present in certain brewing methods!

So how about you take a closer look at all the major differences? Once there, you’ll know which brewing technique suits your caffeine preferences the most.

Chemex vs. French Press vs. Drip Coffee Maker vs. Percolator – Part One

First up is the debate between Chemex vs. French Press. So let’s find out how the former differs from the latter.

But here’s one thing I would like to state before I get to the showdown. Both brewing methods are super affordable. So as far as equipment cost goes, both are clear winners. However, other aspects like brew quality and preparation time are not the same. Read on to know more.

Preparing a brew, even your favorite one, is a task you might not have much time for. Time is not a luxury for everyone now, is it? If you agree with me, then you’ll prefer using a French Press coffee maker.

With French Press, there’s no need for setting up any filter. You don’t even have to pre-heat the cup and brewer. The entire brewing process takes less than 3-4 minutes.

As for the Chemex technique, it takes about 5-6 minutes. Cause the method requires setting up the filter. And let’s not forget the rinsing and “blooming” process of the coffee.

So you know what to pick if time is a concern. 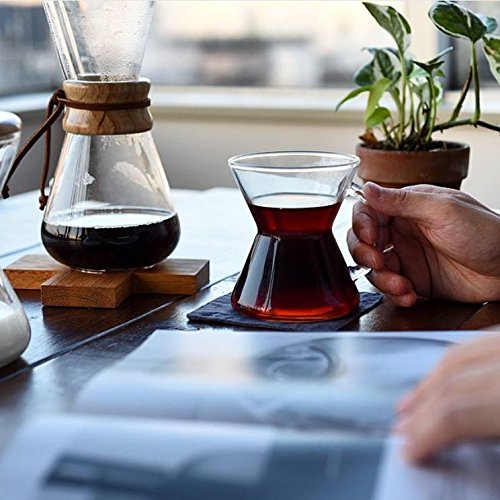 The Chemex method involves grinding the beans first. This you do to obtain medium coarse quality grind. And nothing does the job better than Chemex filters. They are specially built to attach to the brewer’s mouth. And for a more uncompromising filtration process, the filters are thicker than the other brands. (Paper Filter vs. Metal Filter for Coffee)

After the first pour comes the second, which is also a tricky task. You begin this by performing the wiggling motion. Then you move down to a much less gentle spiral to achieve even soaking. And this even soak is necessary for making sure that those grounds are exposed to a uniform brew time and temperature. Such aspects affect the number of good ground elements present in your brew.

How to: The Chemex

On the other hand, the French press demands you to focus your attention on its grinding process. French Press contact time should not be more than 4 minutes. If you wish to prepare an ideal brew that is. So there’s no need to perform any deliberate or patterned movement. Straight pour is more advisable in this case.

Press the handy plunger down steadily and slowly once the brewing is complete. So the grounds reach the bottom, away from the brew.

This means that, in terms of effort, both methods are equally demanding. But I’ll let the cleanup process break the tie.

Chemex gives you a brew that’s sediment-free, right? This suggests that the cleanup doesn’t take more than 30-40 seconds. As for French Press, it leaves a lot of grounds. So the cleanup here is a time-consuming task. About 3-4 minutes!

Medium coarse quality grind is used for both French Press and Chemex. Only this part is similar.

The filtering process of Chemex requires you to use a thicker filter. It’s the only way it can screen out all the unwanted particles. So the result is clear, clean, and bright. Simply perfect to sip!

But, at the same time, such a filter also keeps away all the rich coffee oils.

Moving on to French Press, it skips the paper filter part. The method relies on the plunger mesh. With more focus on brewing! The outcome of which is a greater amount of natural oils plus flavors these oils deliver. This is how the brew comes out full-bodied, aromatic, and rich.

But the drawback here is the large sediments leftover. French Press leaves you with more gunk, unfortunately.

Chemex vs. French Press: Which to Pick?

So in simple words…

Pick the Chemex if you’re a pour-over-coffee lover. The method is more difficult to go through. But it provides clean, smooth, fine-tasting filter coffee.

And opt for French Press if you prefer a simpler brewing technique.

French Press works with coarse grinds. And Drip machines with medium grinds. Also, keep in mind that consistency plays a significant role too. I mean if the grind is too fine, coarse, or inconsistent, the end result is always poor.

The filter design in each device requires even coffee grinds. Only then can the thing make way for optimal coffee extraction from those ground beans.

What about the number of cups each brewing method produces? This is what brings the coffee maker size into the picture. The best French press gives you a maximum number of 10 cups. And it starts with a single serve. As for a Drip machine, the appliance also yields the same amount. But it begins at more than a single serve.

Which technique is faster at providing you with your morning sunshine? It’s French Press of course! It’s always French Press. 2 to 3 minutes is all!

A Drip Coffee Maker, on the other hand, takes 5 to 10 minutes. The machine warms up first and then brews for the stipulated amount of time.

As for cleanup, French Press wins again. You just have to rinse it. But the Drip machine also demands a filter change. 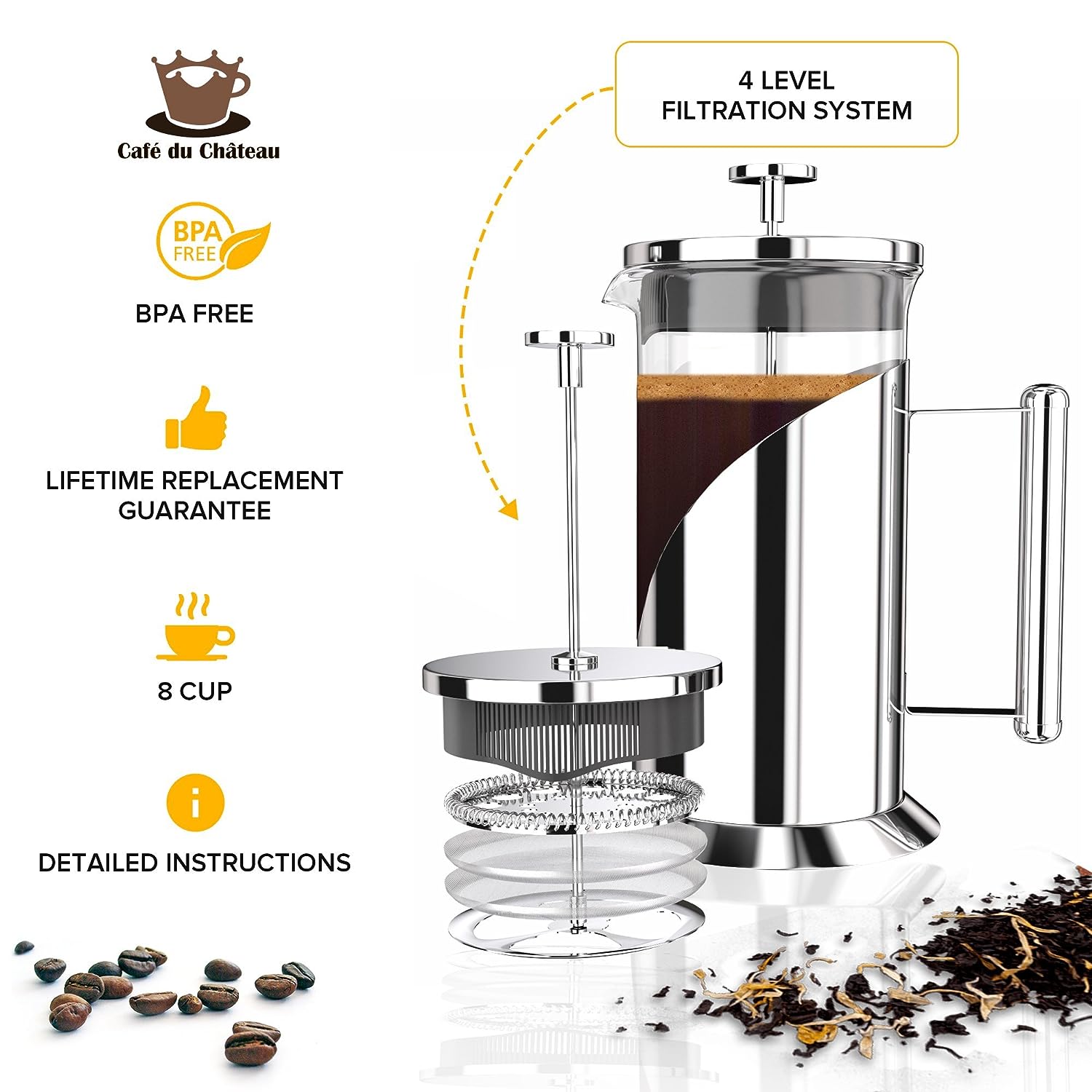 Making coffee and perfecting it are two different stories. So which brewing method makes both easier?

In this department, here’s what you need to factor in. Variables like brew time, water temperature, coffee grind, and plunger filter.

When dealing with French Press, brew time seems like a vital aspect. Too short or too long, and the coffee starts to taste very weak and over-brewed. In simple words, French Press is not easy to use initially.

Here’s a video that explains how to use a French Press:

Luckily, for Drip Coffee Maker enthusiasts, I have good news. All you have to do is measure the ground coffee amount. Then pop the coffee into that machine before checking the water level. And the machine gets your drink ready!

But the only problem here is changing the filter post each brew. Otherwise, the coffee is more likely to taste bad. If the grind is too fine or too coarse!

French Press allows you to control every variable. This ensures a perfect brew that satisfies the taste buds thoroughly. Even though the process is a bit more complex, it doesn’t really matter. If your priority is taste!

But the same does not hold true for Drip machines. Their paper filter tends to retain most of the oil. So that richness doesn’t reach your cup. In that case, the absence of paper filter in French Press is great news. As it maximizes the rich flavor potential!

French Press vs. Drip Coffee Maker: Which to Pick?

However, if you want your coffee pot to remain warm for a long period of time, then opt for Drip Coffee Maker. Cause French Press doesn’t give you that.

Now you know what the Drip machine is and how it works. But what about the Percolator?

Percolators and Drip Coffee Makers are different in the sense that the former cycles water multiple times. The outcome of which is over-extraction. With the Percolator, you get robust and strong coffee alright. But it’s also bitter tasting. So it’s necessary to babysit your Percolator to keep a check on the brew time and temperature. Otherwise, the pleasant taste gets compromised.

How to use a Coffee Percolator?

You should also know that Percolators are designed with either self-heating or non-self-heating settings. So you can use them outdoors as well.

Now let’s get to know the most notable differences between the two brewing techniques.

There’s no denying that a Percolator brews stronger coffee. Since it cycles water multiple times. As for a Drip machine, the device runs water only once. This makes the brew less strong but smoother. And also cleaner of course!

Do you want to prepare coffee for a crowd in a short span of time? Yes? Then you require a Percolator. This particular unit brews as many as 12 cups in one go.

To the contrary, Drip Coffee Makers produce 1 to 2 cups in the same amount of time.

Now you already know that a Drip machine regulates brew time and heat automatically. And you don’t even have to shell out more dollars to gain access to such convenience. Unlike the Percolator that demands extra dough.

So go for the Drip Coffee Maker if you want more affordable convenience. But if you’re not working on a budget, you can choose an advanced Percolator.

Drip Coffee Maker vs. Percolator: Which to Pick?

Are you more interested in flavor depth and easy usability?

Or do you prefer something to produce big batches?

For the former, pick a Drip Coffee Maker. And for the latter, nothing does the job better than a Percolator.

Now you know how each brewing method works. And what it has to offer in the form of your brew cup and quality. Not everybody has the same taste when it comes to coffee. So there’s no right answer here. The decision is entirely based on your caffeine tastes and preferences.

But I have played my part and explained the major differences. Now it’s your turn to make a choice. A well-informed choice, if you must. Cause, after all, your mornings deserve that!