Home » Home and Kitchen » AeroPress vs. French Press (if You Love Coffee, You Need To Know)

Comparing AeroPress vs. French Press is important when deciding between the two. Say you want to buy a gift for a friend, relative, loved one, or even yourself. It’s not easy figuring out which one to pick. The truth of the matter is that not many people get the difference. After all, both brewing devices are manual. Plus, they use the same brewing technique; steeping.

If you’re a coffee lover, then you know how the two coffee makers attract both praise and criticism. It’s only natural for you to want to have more control over your brewing process. That’s the reason why you choose manual brewing in the first place.

But even though both devices do the same thing, the end result they produce is quite different. Read through the AeroPress vs. French Press comparison for a better understanding.

What You Should Know Before Reading On

Let me bring to your notice that the company AeroPress managed to take over the world of coffee brewing by a storm. They manufacture crafty devices that you don’t take time to fall head over heels in love with. The AeroPress coffee maker is becoming increasingly popular. However, that doesn’t affect the traditional image and reputation of the French Press.

The supporters of French Press are quite adamant about their purchase. They don’t and won’t trade the thing for any other brewing system. So here’s the question.

What’s so exceptional about such a simple plastic-built cylinder that looks like a gigantic syringe?

With that in place, how about I answer the question! In the form of the ultimate AeroPress vs. French Press comparison!

The Aerobie AeroPress Coffee and Espresso Maker is a device built with two plastic material cylinders. The large cylinder is the chamber for brewing. With openings on either side. One opening contains the filter cap, which is attached to the unit’s chamber. Fresh coffee goes into this brewing chamber that fits into your cup. Then you pour hot water into the coffee.

As for the other cylinder, it’s called the plunger. This you press down into that brewing chamber. As a result of which water pushes down. And adds pressure for coffee extraction!

The greater part of the process is very straightforward and simple. The thing about AeroPress is that it doesn’t brew bad coffee at all. The technique might not be easy like drip brewing. But it’s this particular brewing method that makes coffee so special. Please keep that in mind.

What Makes the AeroPress Coffee Maker So Special?

It’s the Aerobie AeroPress that grants you the opportunity to alter all necessary variables. These include the quantity of ground coffee and water volume. Along with pressure, temperature, and time! This is what sets the AeroPress and French Press apart.

The most appealing aspect of AeroPress coffee maker is that it makes room for the barista to tweak pressure. Based on your personal taste and preferences! Now, this might not come close to the nine bar pressure of espresso machines. But it definitely delivers more than the French pot.

What pressure does is facilitate a fuller extraction. With more soluble solids plus coffee oils that pass into the coffee.

Another aspect that elevates the Aerobie AeroPress Coffee and Espresso Maker is the brewing time. This one offers a shorter preparation time. In comparison to other conventional brewing methods! That is not more than 1 minute.

Again, remember that you can make changes to the time. Depending on your preferences! Some people enjoy coffee after brewing it for as long as five minutes as well. So in that case, convenience and versatility are at your disposal.

Even so, time-wise, the AeroPress coffee maker’s brewing time is much less. Than that of French Press! The latter takes at least five minutes to get the job done. So it’s up to you to decide whether you’d like to wait for 1 minute or 5 minutes. For your morning coffee!

Here’s the final shining feature of the Aerobie AeroPress Coffee and Espresso Maker. The device is incredibly easy and convenient to manage. The structure allows coffee grinds to push through its brewing chamber. With the help of the rubber seal. And this means not having to deal with leftover coffee grinds in the cup. Something that often tends to happen when using French pot!

At the time of cleaning out French Press, you’re forced to clear the big coffee mess. Unlike the AeroPress coffee maker! So don’t worry about wasting your precious time in the morning. Getting rid of leftover grinds from the sink is not a part of the experience. Without the use of the knock box that too! But in the case of French Press or even espresso pucks, the same task can become quite difficult.

Now, how about addressing your concerns regarding the plastic construction of the AeroPress? You’ll be relieved to know that the Aerobie Brewing System is totally BPA-free. And dishwasher-friendly! 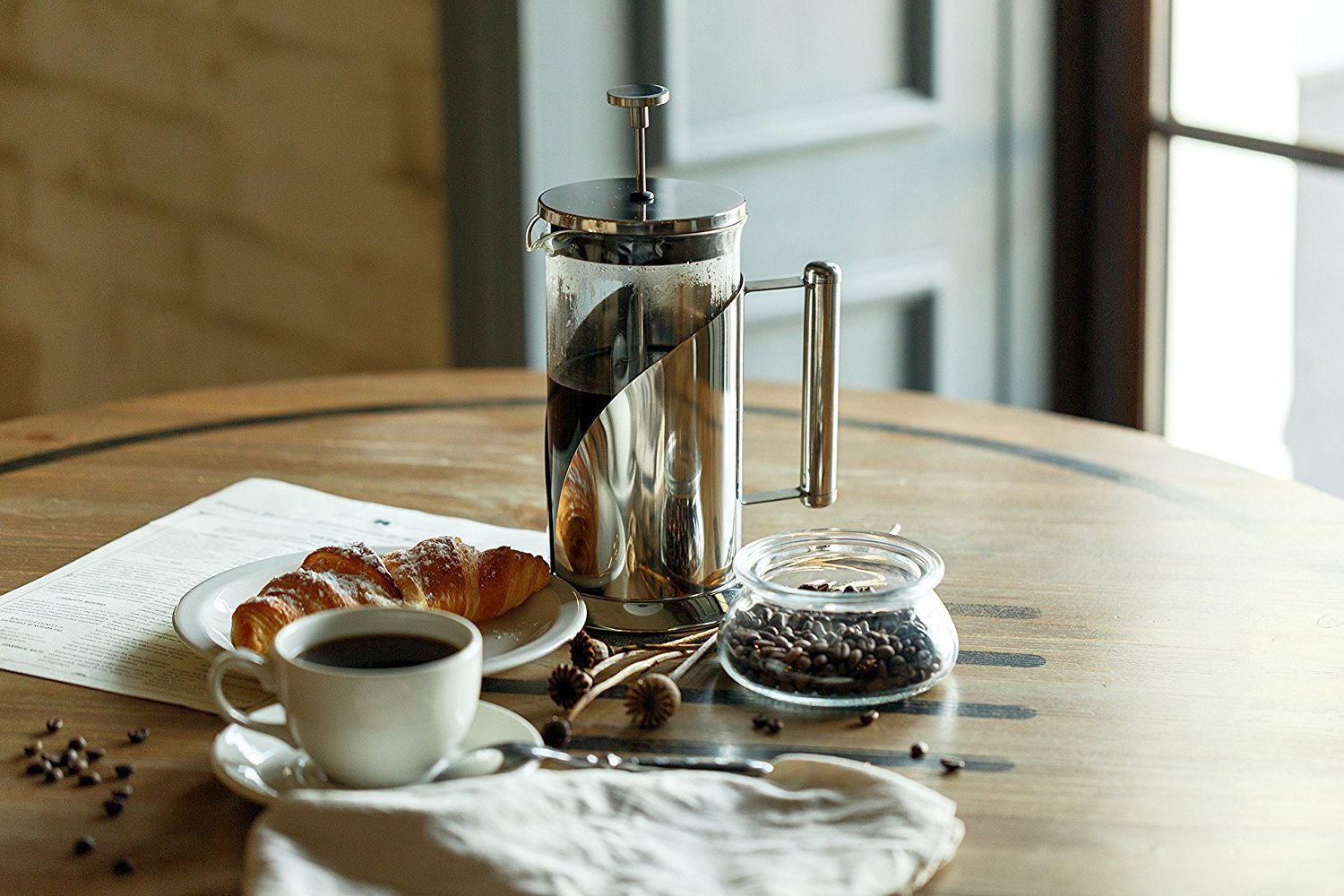 Now it’s time to present the other side of the coin. And that is the best French press. So make way for the Café du Chateau French Press Coffee Maker. It’s because of models like these that there are loyal French Press coffee addicts. Even an AeroPress devotee enjoys a cup of coffee brewed in such a French Press pot once in a while.

What Makes the French Press Coffee Maker So Special?

There’s no denying that French Press brews in a more traditional manner. It has the ability to produce stronger and more robust tasting coffee. All thanks to the use of metal mesh. In place of the AeroPress device’s micro-filter!

Now I’m not going to lie to you about finding leftover coffee grains in the cup. This might happen a lot. But just because it happens also means you get more oils and tastier properties from those coffee beans. The soluble solids and aromatic oils are the primary reasons for the pure richness and deliciousness.

Taste-wise, AeroPress coffee simply cannot compete against French Press. Comparatively speaking, the flavor of the former is more rounded and milder. Than that of the latter!

Here’s another reason why French pots are still a major player on the current market. They brew more than only a small cup size. Traditional pots like these brew at least eight cups of coffee. And in some cases, the quantity is even bigger.

So for a big family, an AeroPress coffee maker might not seem like an excellent choice. At such times, what you require is the Café du Chateau French Press Coffee Maker. Unless you decide to get each member his or her own AeroPress! And that sounds like a horrible and money-wasting idea.

Needless to say, French Press pots have their own place in every such kitchen. The coffee that brews in them is to die for. Plus, they give you the opportunity to brew for the entire family. All at the same time!

AeroPress vs. French Press: Battle of the Presses 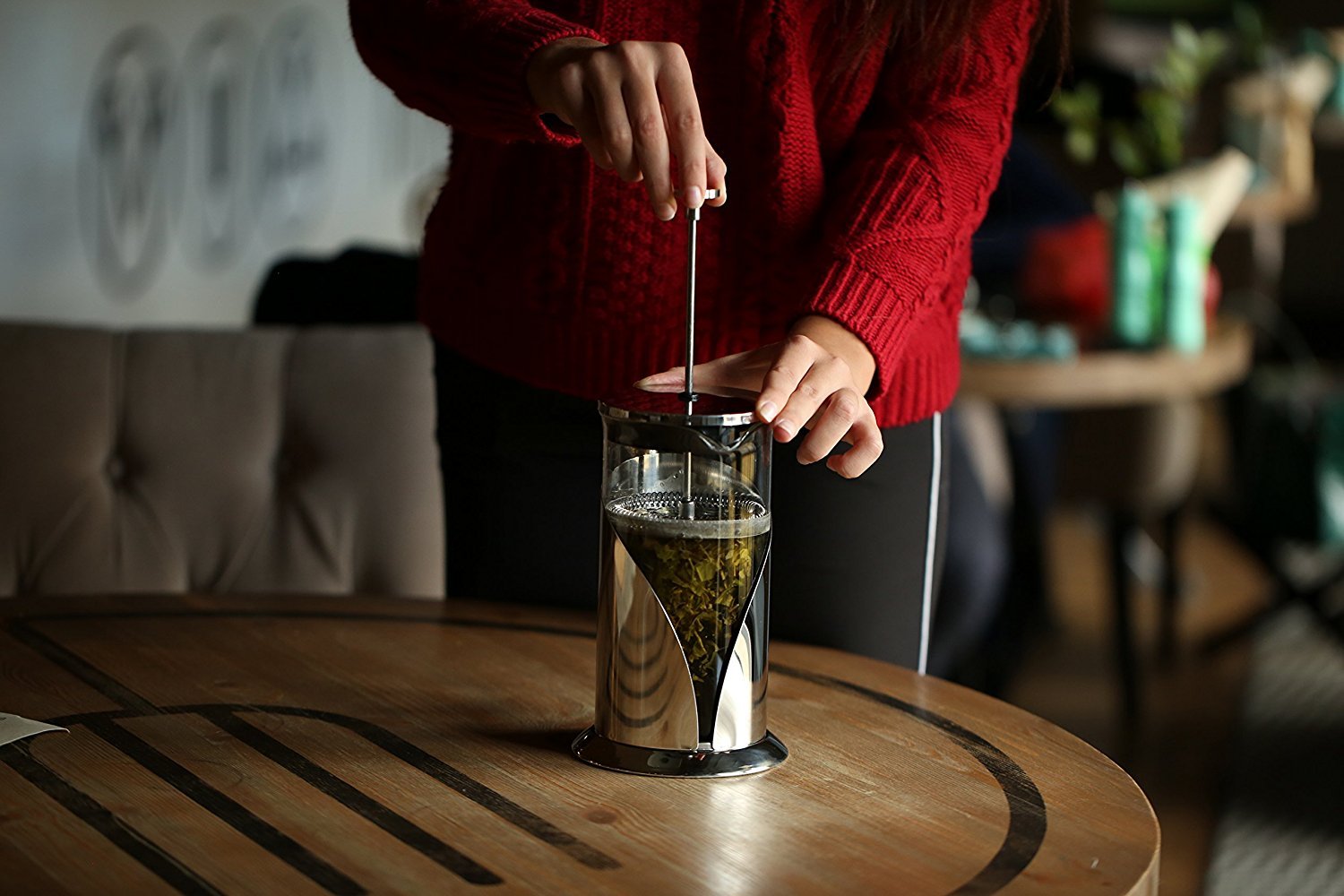 Now what you see below is an important summary. To complete the AeroPress vs. French Press comparison! So here’s a list of the unlikeness between the two coffee makers.

Look at any such AeroPress vs. French Press article and you’ll see the same result. But, even so, both the brewing techniques are great. Each method appeals to a different taste. However, both come close to the espresso style. And that too with more body and flavors!

So it all depends on the kind of caffeine drinker you are. Have you got that figured out?